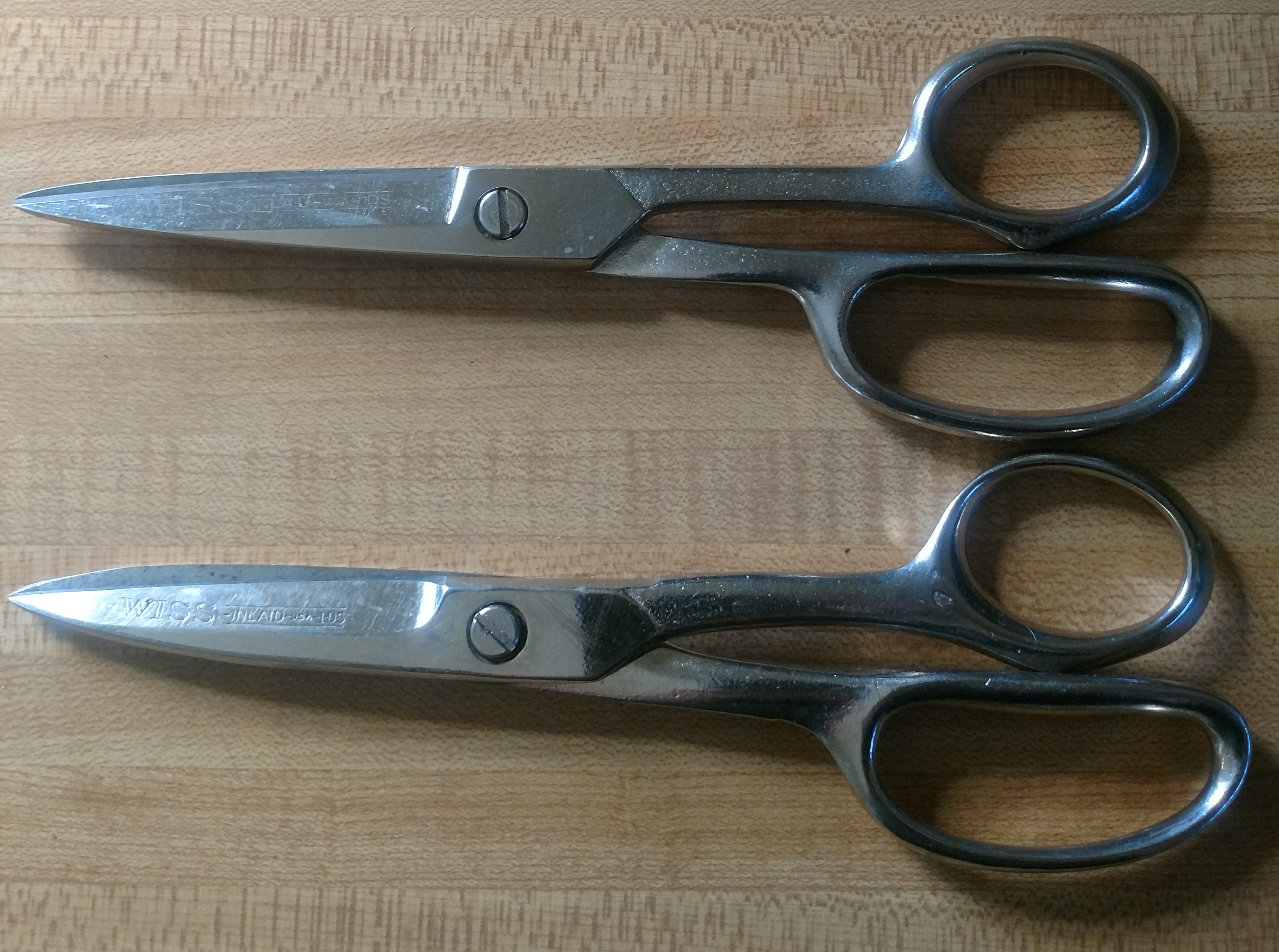 "The Recollection of Quality remains long after the price is forgotten."

These words hung on the wall in the office of Frederick Charles Wiss, son of Jacob Wiss, who founded J. Wiss and Sons in Newark N.J. in 1848. The company has lived by those words for over 150 years.

A number of years ago, I was told by the plant foreman to order some "good scissors." He needed them for cutting aluminum honeycomb for clean room panels, and they were going through a pair of scissors monthly. (Dull after a week or two, and broken after four or five weeks)

After doing an hour or so of research, I decided to order Wiss 1DS 8" shears. This particular model is often used in the poultry industry for cutting bones. It is also used by aircraft manufacturers. Two of the ones I purchased from eBay were from Boeing.

*Note: the 1DS model has been replaced by the 1DSN model, which has a larger handle, adding 1/2" to the overall length.

My foreman was irate when he learned I spent $50 on two pair, though he later admitted that I had chosen well, and they were both still in use, one sharpening and three years later, when I left the company. I dropped in for a visit several years later, and they were still being used.

I decided to purchase several pairs for myself, about five years ago. I ended up with four pairs, all used, all from eBay. The prices ranged from $8-$15. One of those I gave to my mother, and the other three sit in my silverware drawer. All get daily use, from cutting wrapping paper to cutting up a chicken, they've handled every task I've thrown at them. These are "buy it for life" products, and I own no other scissors (except for a very nice pair of barber's shears, which only get used on hair).

So, what makes these scissors so good? It is the difference between a utensil and a tool. Most scissors are utensils, suitable for light duty at best. These shears, made by Wiss, are a tool. Like any quality tool, they are designed to last a lifetime of average use.

No plastic handles here. Most of the readers here will be familiar with the Fiskars brand orange handled office scissors. The blades are at least twice as thick as those, so no flexing, warping, etc. Most scissors are made of stainless steel these days. Wiss shears are not.

The 1DS scissors are marked "inlaid," so I looked up what that meant in regards to Wiss products. They take a carbon steel blade and weld it to a steel frame, then it is ground and polished, so no seam or join is seen. It is then nickel plated for corrosion resistance. The oldest pair I have is missing the nickel plating at the tips, but is otherwise in remarkably good condition. At some point, the "Wiss 1DS" and "inlaid" markings on the blade were changed from stamped/engraved to etched markings, though the overall quality between the two styles is the same. Engraving was used until at least 1975, and probably later, judging from catalogs and brochures of that time period. As you can see from the photos at the top of this post, there are some subtle differences between early and late model 1DS shears. The older shears have a more pronounced curvature in the handle, the grind on the blade is shorter and ends with a curve where it meets the frame of the handles. The more modern version has a flatter grind that is squared off, and the handles are not curved off of the pivot point. The tip of the older shears is rounded to a point, and the newer shears are much straighter, showing no such curvature. The older shears are more polished than the newer shears, though that is more of an aesthetic thing than a functional one. The screw sticks out much further on the older one as well, whereas it is almost flush on newer models.

The screw joining the two halves of the scissors is made in house by Wiss, and uses their patented SET-EASY® pivot. Wiss claims that their screws are accurate to 1/1000th of an inch. I have no reason to doubt that claim. Once set, I rarely have to readjust it, and when I do, it is mostly on the oldest and most worn pair I own. This is likely due to the fact that Richard J. Wiss invented an improved pivot point screw design (Pat. No. 3,672,053) in 1972, and I believe the oldest pair I have dates from before that point.

Each pair of Wiss blades are paired, from beginning to end. As soon as the raw blade blanks are made they are mated, and remain together though each of the approximately 150 processes required to make a single pair of shears until they are finally "wedded" by the pivot screw. Wiss claims that at least 75% of the manufacturing process is done by hand.

Wiss shears are made in the U.S.A., and carry a lifetime warranty.

For you straight razor fans out there, Wiss also made straight razors until 1924, and some of their blades were welded to Wade & Butcher tangs and other European (German)...
Continue reading...
Mar 11, 2016

My fiance gets a gift from her work each year, and this year the value of the gift was set at $80. She decided we needed new glasses, and set me the task of researching glasses that would be both elegant and durable...and under $80.

Simple, right? Hardly. I like classic, vintage stuff...she likes elegant modern stuff. I figured if there was a happy compromise, it would be found in France. After typing "Best drinking glass" into Google's sorcerous search engine (and muttering a prayer under my breath to appease the internet demons) Google showed me the Duralex Picardie glasses.
And Mr. Bond drinking out of one. Yes, that Mr. Bond. Classy, right? (Skyfall, scorpion bar scene and in the picture below, Quantum of Solace).

Interesting, I thought. A heavy base with tapered octagonal sides that flare out to a thin rim. Rustic, charming, and yet elegant. Also made of tempered glass as well, which is 2.5 times tougher than normal glass. A quick perusal of various articles on the interwebs and more importantly, Amazon reviews from people not trying to make a quick buck from blogs, and it was decided. She would get these glasses in a variety of sizes.

History:
Duralex (from the Latin phrase 'Dura Lex, Sed Lex,' 'The Law is Harsh, but It is the Law.' Perhaps a reference to gravity?) introduced the Picardie line of glassware in the 1930's, where it quickly became the dominant glass in cafés, schools, and homes. Durable, cheap and stackable, it remained a French icon until the 1960's, when it became popular in the U.K. and thereafter American resturants in the '70's and '80's.

Failure to adjust to cheap competition from China and Indonesia and mismanagement caused the company to go into bankruptcy in 2005. As the remaining stocks of Duralex Picardie dwindled, it's reputation grew, along with it's value on the secondary market. At one time, 4 glasses would sell for $100 on eBay.

After a court ordered restructuring, Duralex resumed production a few years later, much to the relief of Duralex fans everywhere.

According to Amazon reviewers, the current production glasses are not as high quality as the older stuff, but that is hardly unexpected. As it turns out, one of the glasses we ordered did have a tiny air bubble trapped within the glass, but they arrived well packed and unbroken.

If you've ever picked up your favorite vintage razor and marveled at the perfection of the craftsmanship, the perfect weight, and elegance of it's design, (yes, Gillette Fatboy, I'm talking about you). You will understand my feelings when I held one of these glasses in my hand for the first time. They are, without a doubt, the most perfect drinking glasses my hands have ever touched.

Also, if you do by chance decide you need these, or anything else from Amazon, be sure to use The Shave Den's affiliate link (click).

More info about that here:
http://theshaveden.com/forums/threads/how-to-support-tsd.29097/

I also ended up purchasing used stemmed picardie wine glasses on eBay (since Duralex no longer produces this specific design) as an engagement gift to go along with the ring, since she does enjoy the occasional glass of wine.

Oddly enough, the French tend to use the regular non-stemmed Picardie glasses for wine in the bistro's rather than a dedicated 'wine glass.'

The Picardie line comes in six sizes (and two colors, though the sizes are limited in the colored glasses).

Here are some more links for anyone interested in learning more about these glasses. (Tapatalk users, click on the phrases below to go to the links)

The original article that led me to Duralex Picardie glasses.

History of the company

A gushing review of the size and shape of the glasses...
Continue reading...
Page 5 of 53
Loading...
XenPorta © Jason Axelrod from 8WAYRUN.COM